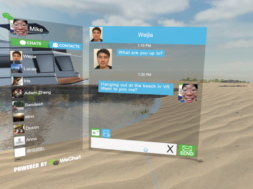 HTC Vive announced yesterday that they will be adding a new social VR experience app called WeChat. Much like Facebook Spaces, WeChat allows users to communicate with others in virtual reality through avatars in VR environments. The integration allows users to access a “digital selfie stick” to take and publish pictures directly to their WeChat account.

According to HTC, WeChat will be available later this year on Viveport. The app was created by ObEN, which was a member of the first Vive X class, HTC’s in-house startup incubator. (Vive X also gave rise to the new eye-tracking HMD add-on we covered here today!) According to this source, ObEN is currently focused on creating the avatars and interactions seen in the WeChat integration, and a custom voice-to-text program that allows in-VR users to reply to outside text messages by holding a Vive controller to their mouth. ObEN also built the avatar creation system.

While WeChat is not super popular in the North America just yet, its popularity in Asia is enormous. UploadVR reported that at last count, WeChat had over 1 billion registered accounts with around 800 million daily active users. Most of this activity is happening in China where the app is known as Weixin.

While these social hang outs have recently seen some satire, such as Jimmy Kimmel’s Facebook Spaces Parody (discussed here) we’re excited to test it out! Currently, the two applications, Spaces and WeChat, are yet not compatible, but the future may bring more options as Facebook has said they are looking to bring their app to other devices such as the Vive.