Vive Focus To Release In Western Markets Later Next Year 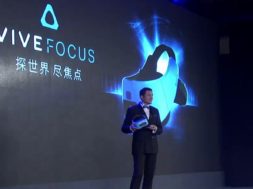 Vive Focus To Release In Western Markets Later Next Year

During the Vive Developer Conference, the HTC Vive team revealed a new standalone VR headset called the Vive Focus. The headset provides a 6DoF experience without the use of a smartphone or a PC. Rather, it uses the latest Qualcomm Snapdragon 835 chip which provides an enhanced experience on a tetherless device. While the Vive team has indicated that the Focus headset will be releasing in China, they didn’t mention anything about the western markets.

But thanks to the dutch gaming studio Pillow’s Willow, we have uncovered that the Vive Focus will be releasing in the western markets some time in 2018. In a press release about their VR game called ‘Spark of Light’ the studio mentioned that, “The HTC Vive Focus will first come to the market in China in early 2018. Later in the year the VR headset will also become available to the rest of the world.”

Pillow’s Willow studios is one of the early partners for the Vive Focus and ‘Spark of Light’ was actually shown on stage during the VDC keynote presentations. “We chose Spark of Light, because this game simply shows the new unique features of our new VR headset,” said HTC Vive President China, Alvin Graylin Wang. “You can move more freely in the virtual world with this VR headset, with an integrated processor, and 6DoF. You can also see from close up all the beautiful details of the game, which is all around you.”

Peter Kortenhoeve, the Chief Creative Officer at Pillow’s Willow studios also talked about the draw points of the upcoming Vive Focus headset. In a rough translation he stated, “With our Dream Light system we anticipated this next generation VR headset. Because these VR headsets can show more images per second compared to the variants like a smartphone, the experience for the players is much nicer and more intense. Meanwhile we can announce that our next game, which is currently under development, will be released on the Vive Wave platform and will therefore be available on many different VR headsets.”

There is no set price point yet on the Vive Focus. Make sure to stay tuned for further updates.