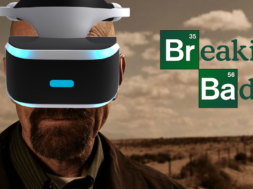 Recently, Sony invited out seven high-profile TV producers to their Hollywood campus to introduce them to some VR experiences and technology. In attendance were David Shore of ‘The Blacklist,’ Ron Moore of ‘Battlestar Galactica, and Vince Gilligan of ‘Breaking Bad.’ While many of these producers were intrigued by the new virtual medium, Gilligan took exceptional interest to the technology and has agreed to create a non-gaming virtual reality experience for the hit show ‘Breaking Bad.’

House also mentioned that his team oversees PlayStation Vue which is a live streaming TV service with sports, news, and hit TV shows. It has the highest retention rate of any other network service in their portfolio including PlayStation Plus and PlayStation music. While the number of subscribers weren’t mentioned, House said that PlayStation Vue has more users on non-PlayStation devices than on their gaming console with high monthly viewership from people aged 18-34. He believes that this collaboration between Sony PlayStation and Vince Gilligan will lead to more adoption of the VR technology, including their PS VR headset. “I think [this] could be another interesting way to see how VR can drive towards the mainstream,” said House. Sony has sold more than 1 million units worldwide as of date, according to The Verge.

Sony has yet to announce whether this project with Gilligan will be episodic or a one-off experience. Stay tuned for further updates and information.