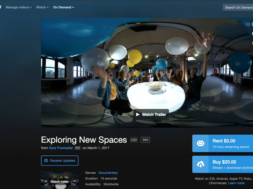 Vimeo is one of the largest, if not the largest platform for video hosting right behind YouTube with hundreds of millions of videos to choose from. Many creative artists seek and upload to Vimeo because of their high quality platform. Today, the company announced that it’ll be supporting 360 videos where users can upload their new immersive videos.

“Vimeo’s creator community is known for pioneering new video formats and pushing the boundaries of storytelling,” said Anjali Sud, SVP and GM of Vimeo. “With this launch we hope to usher in a new wave of immersive content that sets the standard for cinematic quality and powerful narratives in a 360 environment. We believe Vimeo creators are the missing piece to taking 360 video from nascent to mainstream.”

The company has promisded that it’ll offer high quality hosting of 360 videos for pleasurable viewing pleasure. Creators can upload 360 video content up to 8K in resolution and have it playback in very high qualities. This will include their HD offline viewing in Vimeo’s mobile app.

Vimeo will also offer borth monoscopic and stereoscopic sounds for creators through metadata. They will ensure custom player embed settings and also capture email leads and insert calls-to-action directly in the embedded player. The people that upload to Vimeo will have control to where the exact starting point is in the video. You’ll be able to manually set which direction the person is going to start off looking.

For people that aren’t familiar with 360 videos, Vimeo will be offering a 360 video school. Here, you’ll have access to resources on the basics of the new 360 platform. You can check out tutorials about 360 cameras, pre-production, shooting, and editing.

An open marketplace will be available for creators to directly sell 360 videos to audiences on Vimeo. This feature is available to Vimeo PRO members and Business members where creators can choose to rent, sell, or subscribe their immersive 360 content. 90% of the proceeds will be kicked back to you after transaction costs.

“Vimeo has always been committed to preserving and delivering the highest quality video and our move into 360 expands our premium video technology solution to 360 filmmakers,” said Sara Poorsattar, Vimeo’s Director of Video Product. “Their stories now benefit from our advanced video compression and player customization tools, along with streaming and offline viewing in up to 4K.”

360 content on Vimeo can be viewed through Zeiss VR One, Samsung Gear VR, and Google Daydream headsets. Support will be coming soon for the Oculus RIft and HTC Vive. The 360 videos on Vimeo are also downloadable in HD where viewers can watch the immersive content at anytime.