This Video Might Convince You To Play Pavlov VR 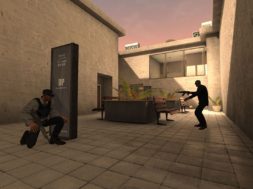 This Video Might Convince You To Play Pavlov VR

Pavlov is a first person multiplayer shooter developed by davevillz for VR. Being similar in concept to CS:GO, you’ll be facing off against your opposing foes in securing key-locations for your team. Pavlov is currently available on SteamVR as an early access with mostly positive reviews. Recently, Kugo the Mighty who’s famously known for playing CS:GO games decided to give Pavlov VR a chance and the results were hysterical.

At first glance you’ll notice the map is quite similar to the one found on CS:GO. From the desert terrain to some of the key locations, you’ll find the familiarity and resemblance. Another thing you’ll notice is that the mechanics are a bit flawed, considering the game is still in early access with a small dev team. But this is what makes it so enjoyable to watch as Kugo struggles to perform the simplest of actions.

But aside from the glitches, you can see that the YouTuber is really enjoying the game. Pavlov offers locomotion movement on top of voice-chat that allows you to strategize with the team. You’ll also find hints of elements that resemble closer to real-life versus CS:GO where all of the action commands are performed through the stroke of a key.

You have the ability to aim down the barrel of your gun and take shots at your opponents without the use of a keyboard. You can also duck and cover in physical settings that help provide a heightened sense of realism.

While Pavlov VR isn’t perfect by any means, it provides a casual experience that many gamers would find enjoyable. Make sure to check it out today.