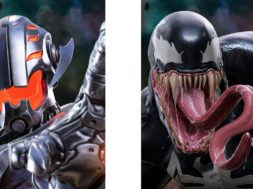 Oculus finally made an announcement on the release date of the upcoming game Marvel Powers United VR. And while that itself was quite exciting, they also revealed that Venom and Ultron will be joining the list of heroes that you’ll be able to play.

The creature known as Venom is the convergence of two beings who share a fierce hatred of Spider-Man: disgruntled journalist Eddie Brock, and a spurned alien symbiote. Bonded and fused at the molecular level, Venom possesses incredible new strength and abilities as well as knowledge of Spider-Man’s true identity. He is driven by an insatiable hunger to destroy Spider-Man and those who follow him.

Though the creation known as Ultron was created with the best of intentions, no one could have predicted that the sentient robot would rebel, becoming a threat to all humanity. After being driven off into the far reaches of the cosmos by the Avengers and their allies, it was believed Ultron had been destroyed.

However, his frayed consciousness persisted until he came into contact with a techno-organic alien race which assisted him in unifying his fragmented consciousness back into focus and into a new upgraded body. Ultron has targeted Earth and its mighty heroes once again, but this time he is coming prepared with new powers, abilities and strong allies.

Marvel Powers United VR will be hitting the Oculus marketplace on July 26th for $39.99. The game will be exclusive to Oculus.