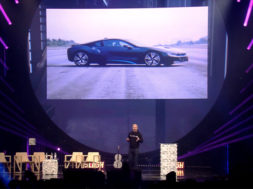 While that statement might sound gimmicky, there are many VCs around the world that seems to have trust in the company. Recently, Varjo has raised $8.2 million in Series A funding backed by The EQT Ventures Fund in partnership with Lifeline Ventures, The Venture Reality Fund (The VR Fund), John Lindfors (DST Global), Foobar Technologies, Presence Capital Fund, Bragiel Bros, and Sisu Game Ventures Oy.

Below is a chart from Varjo.

In his keynote presentation, Konttori describes how they are able to get such high quality displays in VR HMDs.

“Its a very simple concept,” Kontorri describes. “We have a normal VR headset display that shows the peripheral view. We have a super high quality OLED display that has the human eye resolution that gets reflected on a Varjo made combiner which is letting you see both of the displays at the same time. And then what we do with the gaze tracking is that we tilt this combiner ever so slightly and the reflection changes so that you’re seeing the image at a different place at the place where it’s supposed to be in.”

They have sent the first iteration of the headsets out to various companies to test. The final developer preview model will have an effective resolution of 70 MP and a 100° field-of-view. If this is all true, how would the VR landscape change? How would Varjo compare to Pimax with their 8K VR headsets?

We look forward to seeing what Varjo has to offer in the near future.