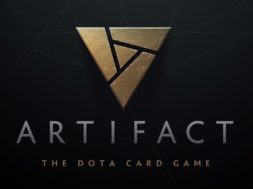 Valve seems to be expanding their vision with DOTA by announcing a new card game for their popular MOBA called Artifact. In a short trailer (which doesn’t show much at all), you can see a logo with a sentence underneath it that reads, “THE DOTA CARD GAME.”

Valve has stated that this new card game will be releasing sometime in 2018. But it doesn’t seem to be receiving too much love for it. As a matter of fact, the YouTube video for Artifact currently has 2,131 likes and 12,904 dislikes with top comments being, “hi blizzard” or “i just lost faith for valve.”

Many Valve fans are wanting to see the next iteration of games and sequels such as Day of Defeat, Portal, and Half-Life although most likely this will never happen.

We know that Hearthstone by Blizzard is an online card game that’s quite popular for esports gamers. With Valve trying to get involved in the mix, there will be some high level of competition between the two companies.

Currently, DOTA 2 is the highest paying esports game in the world with their ongoing international tournament offering a $24 million + prize pool. Many DOTA fans have been wanting to see something like Artifact so who knows, it might become just as successful as Hearthstone or even bigger.