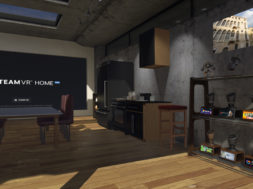 For players who have opted into SteamVR beta, you’ll notice some updates to the new virtual home.

Players will now be able to bring trophies that represent games from their SteamVR Library into SteamVR Home. These Trophies will upgrade as the player completes various achievements and crafts badges in each particular game. In addition, the trophies give players access to game details and a quick way to launch the game. The virtual trophies serve as decorations, shortcuts, and a showcase of all of your accomplishments.

The new update will allow players to place screenshots and artwork from their favorite games in their SteamVR Home. These images can spanwed from the Things menu in the Content Browser or from the Community Wall in the default SteamVR Home environment. For people wanting to adjust the location of their screenshot and art panel, you can simply grab the edge with the trigger button. You can also remove them by using the Multi-Tool.

SteamVR Homes users can also place their panels — which includes recent apps, friends list, and rooms list –in any location or in any environment. You environment is almost like a lego block where these panels can be rearranged in your Steam Home to have quick access to friends, rooms, and games.

Just like the screenshots and artwork, you can spawn these panels from the Things menu in the Content Browser. You can move them by grabbing the edge or remove them completely by using the Multi-Tool.

You’ll notice that Steam Audio is now integrated into SteamVR Home. The new feature is enabled by default and makes it easy to integrate immersive audio into your workshop environment. Steam Audio “binaurally renders direct sound using HRTFs to accurately model the direction of a sound source relative to the listener,” according to Valve.

With this new feature in the virtual house, you’ll get an impression of where the sound is coming from including height and distance from the source.

To make things a little bit more fun, Valve has released a Boxing Ring for your Steam VR Home environment. You’ll be able to visit the ring and train your virtual punching abilities while lifting weights and competing against a bot. While it’s a little different from Knockout League, you’ll notice that it has similar patterns.

In addition to the newly released features, Valve has added a slew of new furniture and increased the visual fidelity of existing props and tools. You’ll notice that customizing your home space is even easier now, as Steam has improved the way props and furniture are positioned and placed in-world.

For those of you interested in SteamVR Home Beta, make sure to check out this article which lists the necessary steps.