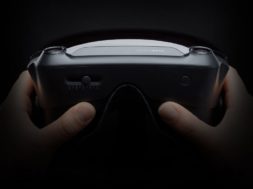 In a surprising revelation, Valve has finalized the date of release (or more information) for their rumored headset called the Valve Index VR HMD for some time in May 2019.

While we’ve seen many competitors create compelling VR HMDs, Valve was one of the quiet frontrunners in the industry who has moved the chain for the community. As a matter of fact, they were actually the main tech developer behind the HTC Vive. Now it looks like its Valve’s turn to brand and launch a VR headset of their own.

Valve has even gone lengths to launch a webpage around the Index on their Steam website which notes “May 2019.”

On the headset itself you can see that there are 2 cameras on the front of the headset. On the bottom there seems to be an adjuster of some sort with a button on the other side.

We know that Valve has been working on their upcoming Knuckles VR motion controllers that will be able to track individual fingers and provide a more immersive feel for VR content.

Paired with the upcoming headset, Valve will be able to deliver a packaged VR solution for all the content that’s already available on the Steam marketplace.

The Steam marketplace is currently the biggest portal for VR content with thousands of games and experiences available. When the company packages everything together, the VR community will have a whole new ecosystem to look forward to.

This new revelation will make the VR hardware industry a lot more competitive even considering Oculus’s new announcements which includes 2 new headsets: The Oculus Rift S and the Oculus Quest.

tags: index vr headset steam vr headset valve valve index
previous The Morrigan Might Be A Fun VR Game To Try Out This Weekend
next Valve Index VR Headset Set To Take Pre-Orders On May 1 With Release Date In June
Related Posts