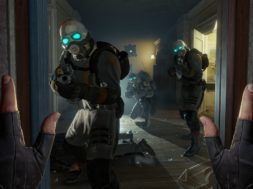 One of the most hyped up franchise games Half Life will be heading to virtual reality. Announced by Valve, the new upcoming VR title will be called Half-Life: Alyx and here is what you need to know.

Valve has recently launched a new VR HMD called the Index which provides some of the most intricate VR experiences through their knuckles controllers and headset. And with that announcement, Gabe Newell promised to release “3 full VR games.” Half-Life: Alyx seems to be one of those 3 upcoming VR titles.

Half-Life: Alyx is Valve’s VR return to the Half-Life series. It’s the story of an impossible fight against a vicious alien race known as the Combine, set between the events of Half-Life and Half-Life 2.

Playing as Alyx Vance, you are humanity’s only chance for survival. The Combine’s control of the planet since the Black Mesa incident has only strengthened as they corral the remaining population in cities. Among them are some of Earth’s greatest scientists: you and your father, Dr. Eli Vance.

As founders of a fledgling resistance, you’ve continued your clandestine scientific activity—performing critical research, and building invaluable tools for the few humans brave enough to defy the Combine.

Every day, you learn more about your enemy, and every day you work toward finding a weakness.

In the game trailer you can see how crisp the movements and the gun mechanics are sort of resembling the quality seen in Boneworks. The graphics are crisp as well with a lot of intricate detail added in. You can also see that you’ll be set in an apocalyptic environment with the urban city in ruins. Oh and the ending to the trailer was a bit of a surprise as well.

As one of the flagship VR games for Valve, they will be pushing the limits of their VR technology utilizing the technology that the Knuckles controllers provide.

If you happen to own a Valve Index HMD and purchase the game you will also receive the following benefits as perks:

Valve has stated that users will receive these benefits as long as you purchase a Valve Index HMD by the end of the year.

We will be providing updates here so stay tuned.