Users Can Download DiRT Rally VR For Free On Steam 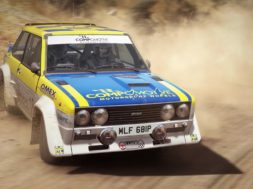 Users Can Download DiRT Rally VR For Free On Steam

The creators of DiRT Rally have put on a special deal for a very limited time (until end of day today) where you can download the VR game for free on Steam.

For those unfamiliar, DiRT Rally is a racing game where you get to drive your vehicle on unpaved roads of the great outdoors. The team has road-tested over 80 million miles to capture that “white knuckle feeling” of racing.

DiRT Rally includes officially licensed World Rallycross content so that you can experience the thrills of some of the world’s fastest off-road cars as you trade paint with other drivers at some of the series’ best-loved circuits.

In the video above you can see the synchronization between you, the VR headset, and the game. You will be placed in the drivers seat next to your teammate who will be giving you instructions of the road. Then you can blast off to drift and maneuver around the rocky curves.

The game offers both single player and high-intensity multiplayer races so that you can enjoy both opportunities.

Make sure to pick up a copy of DiRT Rally today as it will be the final day of its free sale on Steam.