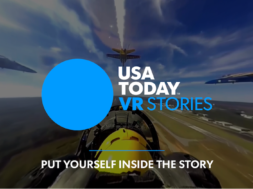 USA Today Network has been hard at work in creating a unique virtual reality news show called ‘VRtually There.’ They’ll be inviting the audience to join in on VR adventures and experiences what 360 video technology is all about. The ‘VRtually There’ series released the first video this past Thursday that takes you on a journey to a hot-air balloon festival in New Mexico and the beautiful canyons in Arizona.

The channel and series is co-produced by YouTube that’ll take the users around the world in wild experiences that’s suppose to captivate the mind unlike the normal 2D medium. The VRtually There series will take you flying with the Blue Angels and even throw you in a cockpit alongside NASCAR drivers at the Indianapolis 500.

The first ‘VRtually There’ 360 VR experience has been sponsored by Toyota, whose familiar with experimenting in emerging technologies. The experience is produced by journalists at Arizona Republic, Des Moines Register and Indianapolis Star. New episodes will be debuting every Thursday at 2PM EST with 3 different segments. The 360 videos will last around approximately 5 minutes in length.

“Our in-house VR content production is unique to the industry, allows us to showcase our great journalism across the NETWORK and allows us to expose our vast audience to this innovative storytelling,” said Joanne Lipman, USA Today network’s chief content officer, in a statement.

To catch the series in VR, you’ll need a capable android phone thats optimized for VR headsets such as the Samsung Gear VR and Google’s Daydream View. We look forward to catching the series and seeing what adventures it’ll take us on.