Urban Parkour In VR With ‘Stride’ 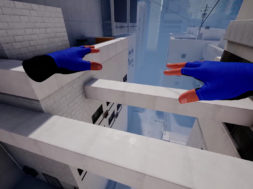 Urban Parkour In VR With ‘Stride’

We’ve now seen a variety of games come to the VR platform where people can virtually do anything. But a fan-favorite “Mirror’s Edge” type of game was missing until now. Joy Way studio has unveiled their next VR title called Stride.

Stride is a story parkour action game in virtual reality similar to Mirror’s Edge where you will be jumping from building to building and taking out enemies on the way.

As you can see in the trailer you’ll be able to pump your arms and make a dash to the next building whether it’s through extreme jumping, climbing, or shooting. The layout is definitely a resemblence to Mirror’s Edge and even has similar coloring for interactive objects.

The graphics look great and the movement seems quite fluid from the gameplay trailer.

It’s been 15 years since the accident — an environmental disaster that left city-state X cut off from the outside world. Once a shiny metropolis, X has devolved into a conflict ridden nightmare. Open battles rage between gangs who fight over dwindling resources amongst the crumbling infrastructure. For the unaffiliated, crushed by poverty and caught between rivaling criminals, hope is all but lost. In this difficult time, a hero must rise up to do what’s right. Are you that hero?

Movement
Navigate city rooftops like a parkour pro. Grab ledges, jump from roof to roof, vault through windows, slide down cables: your possibilities are limited only by your attentiveness, creativity, and reactive skill.

Combat
The city is crawling with enemies who want you dead and your parkour skills will help you defeat them. You can sneak up on bad guys and dispatch them quietly, or fight openly in pitched battles. When there are too many bad guys to take on all at once, use the terrain to your advantage and pick them off one by one. No matter what your fighting style though, expert marksmanship is a must.

A note on motion sickness
Testing has shown that Stride VR does not cause significant motion sickness. The gameplay has been designed such that the player’s hand movements coincide with his avatar’s movements. This means that the load on the player’s vestibular apparatus is kept to a minimum. Although most people do feel minor uneasiness when they first start playing the game, as you master the controls, motion sickness disappears entirely.

Stride is set to release some time this summer of 2020 on the Valve Index, HTC Vive, and Oculus Rift. You can check out updates on their Steam store page. We’ll keep you updated on the developments of this highly anticipate game.