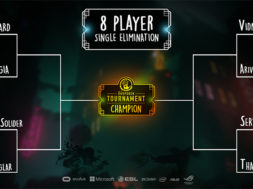 Oculus has just announced the finalists to the first ever The Unspoken VR Tournament. The eight players include Charizard, L_Lugia, CloudExSoldier, NerdBurglar, Vidman321, Ariverajo2857, ServError, and Thavex. These competitive players are set to duke it out tomorrow in NYC at the flagship Microsoft Store. The tournament pool prizes include $3K in cash and the grand prize of Rift + Touch plus a VivoPC X Oculus Ready machine from ASUS. Oculus will be streaming from Twitch at 3pm ET.

For those of you unfamiliar with the game, The Unspoken is a an Oculus Touch‐enabled VR action game that pulls players into a hidden world of spellcasting and magician’s duels. You’ll be able to manipulate the environment around you with arcane forces, summon powerful spells, and rise up through the ranks of an urban magic fight club. The objective is to become the best spellcaster and eliminate any foe that opposes you.

The eight featured players are amongst the best in the game.

Take Jesse Rogers (CloudExSolider) of Tempe, AZ, who went up against the heavily-favored KnyghtArdent in the West A Regionals. No one gave him a chance, resulting in the biggest upset of the tournament to-date. “Being a game developer myself, I have high hopes for VR,” he says. “It’s an amazing feeling being fully immersed in a completely different world.”

And then there’s 14-year-old wunderkind Matthew Smith (S_Lugia) from Houston, who had never played the game until competing—and winning—at DreamHack Austin. He didn’t own a Rift either, until his DreamHack prize was delivered just days before the first round of the current tournament.

At this point in the tournament, most competitors have gravitated toward the Blackjack Class, which favors deception, street hustle, and deadly knives. We’ll see if any finalists try to throw off the competition by switching things up at the last minute.

Huntington, NY’s Erik Servili (ServError) points to the electric nature of the East A Regionals’ concluding round as a highlight. “You could hear the crowd engaged in the gameplay as they responded to every successful maneuver or hit,” he says. “It was the first time I’ve seen something like it for a VR game, and I think we’ll see a lot more of it moving forward.”

For Corey Vecchiarino (Thavex) of Providence, RI, the main benefit of The Unspoken VR Tournament has been its galvanizing effect on the game’s community and Discord channel. “All the top players have become really close—as much as possible in an online chat forum—and we all talk to each other a lot,” he explains.

“Social VR has made me very happy,” agrees Salt Lake City’s Ashton Ames (Vidman321). “It gives you a much more personal connection to the person you’re talking to compared to on a screen, since you can see where they’re looking and how they’re emoting with their body.”

Among all the competitors, excitement around VR’s power to transport us to new worlds and its potential impact on the future of gaming is high.

“No other gaming experience can compare to virtual reality,” explains Shaun Lane (Nerdburglar) of Huntington Beach, CA. “Even if someone has triple 4K monitors, the immersion just isn’t the same as VR.”

“I’m very excited about how the health field and the military are finding ways to utilize VR for training simulations,” adds John Rivera (Ariverajo2857 / Temaias) of Meriden, CT.

We’re excited to grow a robust and engaged community connected through their shared enthusiasm for VR. Beyond the prizes and bragging rights, continuing to develop that network and make it a little more visible may just be the most significant upshot.

Live shoutcasting will be hosted by Siefe and OpticJ who are well respected within the world of eSports. There will also be special guests like Insomniac Games Senior Community Developer Tim Salvitti that’ll be making an appearce. While this may seem like a small tournament, it’s actually a big step forward for the community as we introduce VR into the world of eSports. These eight players will surely be making history tomorrow in NYC.