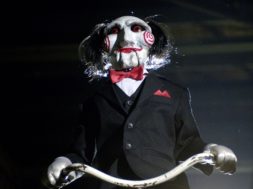 Unity Technologies has been on the move this week announcing some amazing things for developers and their platform such as Unity 2017.1. Today, they continue to dazzle us with another big announcement where they’ll be launching the first-of-its-kind virtual reality advertisement for Lionsgate’s upcoming movie, Jigsaw. This particular film is the newest blockbuster in Liongate’s Saw horror film series, which is the highest-grossing horror franchise of all time accumulating $873 million worldwide.

Built on Unity, the new interactive ad format will be a “Virtual Room,” available for surfacing in any existing VR apps also made with Unity. This shortform VR experience will give players the ability to interact with objects as they learn more about the new film. Ultimately, you must decide how to save yourself from impending doom. The Jigsaw VR “Virtual Room” was created within the  Interactive Advertising Bureau (IAB) emerging ad experience guidelines, and will launch this fall, prior to Lionsgate’s global theatrical release of the film on October 27th.

“Diehard franchise fans and new horror buffs alike are in store for a truly visceral and entertaining experience that’s sure to thrill,” said Lionsgate’s SVP of Digital Marketing, David Edwards. “As big believers in the power of immersive storytelling, we are incredibly excited to bring Jigsaw into the world of VR.”

Unity is currently the main platform in which VR developers create content for their VR experiences. They account for nearly two-thirds of VR content today. Within non-VR mobile apps, Unity serves as the largest independent ad platform in mobile games, reaching more than one billion users per month. As the VR medium continues to develop, advertising will offer a new way for Unity developers to monetize content.

“At Unity, we want to redefine how people consume advertising, and are thrilled to have a visionary studio like Lionsgate take this leap forward with us,” said Agatha Bochenek, Head of Mobile and VR/AR Advertising at Unity Technologies. “To grow this emerging form of advertising entertainment, we are taking the guesswork out of the biggest hurdles in a new medium — production and distribution. Our goal is to enable advertisers to build high-quality, engaging content quickly which will create memorable experiences, and can seamlessly reach users across all VR platforms.”

Unity stated that Jigsaw VR “Virtual Room” is a pilot program intended to showcase their capabilities to bring fully engaging VR ads to the world. You can sign-up today to see its full capabilities.