Unity Announces Cabbibo as First Ever VR Artist in Residence 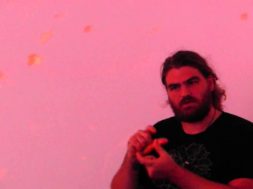 Unity Announces Cabbibo as First Ever VR Artist in Residence

“I want to create experiences that stay with you. That aren’t just methods for escape, but pieces that pose questions and make you consider more what it means to be in our miraculous reality. I like making people marvel and wonder — to rekindle the delight of discovering something for the first time,” said Cohen.“I try to use raytracing in strange ways, make compute shaders tell stories, and create art that is inherently physical.”

Cohen will be join the Unity Labs’ San Francisco office where he will immerse himself in their culture and create his unique works of art. “It’s amazing to sit next to people who actually know what they are doing!” jokes Isaac of his experiences at Unity. “Sitting next to graphics genius Morten Mikkelsen, I’ve already learned in 3 days what took me all last year, and it’s so exciting to see how these new learnings will affect what I’m making next!” Cohen will also contribute guest blogs that showcase how he uses Unity to push VR boundaries while inspiring other artists.

According to his bio, Cohen has published an eclectic array of works ranging from audiovisual fact-learning apps, interactive experiences made from recursive algorithms, to a real-time procedural music blogs where users traverse a universe of sound. His work has been featured in various exhibitions and written about in such blogs as Intel’s Creator’s Project, Google Experiments, The Wild Magazine, Mashable, The Future of Storytelling and Vice’s Thump. In addition to creating a plethora of experiences, Cohen is also responsible for a number of open source tools to help others create stunning real-time graphics. Check out his demo reel below:

We’re excited to follow along with Cohen’s journey and see what’s in store. To stay up to date, Unity suggests following him on Twitter (@cabbibo), checking out his WebGL Work (cabbi.bo), and exploring his writings on VR (cabbibo.is).