Home VR Games Undead Citadel Might Be A VR Game We Can Get Behind
VR Games
VR News
February 18, 2019 Griffin Streeter 0

Undead Citadel Might Be A VR Game We Can Get Behind 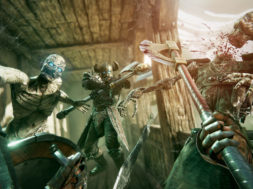 Undead Citadel Might Be A VR Game We Can Get Behind

VR RPG games such as Skyrim VR and Fallout 4 VR has brought many gamers a lot of enjoyment. Users were able to spend tens of hours in a virtual world where they can explore and go on epic journeys with quality content and storyline.

And while those games were amazing, we are kind of excited to see what the upcoming game, Undead Citadel has in store for us.

Being developed by Dark Curry, Undead Citadel is an action-packed title exclusively built for VR that relies on a hybrid physics-driven combat system which allows for unobtrusive close/ranged medieval skirmishes with real-life movements, all within a visually stunning fantasy universe threatened by undead annihilation.

You will play as Sir Anvil Capheus, who is more of a vulgar, obnoxious, and crude criminal rather than your typical knight in shining armour, yet seemingly he is all that is left in order to restore the former glory of Ingolstadt and banish the undead…

Dark Curry is an indie-dev company made up of 6 people based in Barcelona. This is the first VR game that the team is working on so we don’t know what the end-quality build will look like. But from what we can see in the teaser, it looks quite polished in terms of the graphics.

In this clip you can see how the combat system will work. It looks to have some sort of time manipulation so you can engage in epic combat against multiple enemies at once.

In this separate clip you can see how you are able to interact with the environment. While there’s much work ahead, the game is starting to look like a VR game that we can possibly get behind.

There isn’t a clear release date just yet besides it releasing some time this year in 2019. There is also no word yet on what the price point will look like. We look forward to checking out the project as it gets close to being completed.