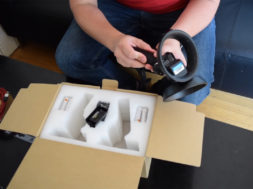 Microsoft recently showcased their upcoming Windows 10 mixed reality motion controllers which will be offering 6DoF according to sources. The controllers will come bundled with the Acer mixed reality headset for $400 later this year.

In this unboxing video you’ll see two boxes. One box contains the mixed reality controllers while the other contains some wiring. The controllers will be powered through rechargeable AA batteries. Both controllers have analogue sticks with touchpads on top. On the bottom side is a trigger.

The design is somewhat similar to the Oculus Touch and the Vive wand with circular sensors in the front. However, to make it a little more dazzling, Microsoft has put LED lighting to indicate if the controllers are on or off.

Unfortunately in the video you do not see the new mixed reality controllers in action as this is part of the new dev kit that Microsoft has sent out. These are reference designs and may be subject to change when the consumer versions launch. Make sure to stay tuned as further news develops around the new Windows mixed reality motion controllers