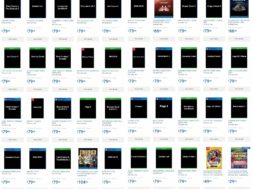 Walmart seems to be at it again with the leaks. This time, the company made a critical mistake by publishing the new video game releases page while being incomplete. And of course, someone was able to grab a screenshot of it before the page was taken down.

According to the list, there are several games to keep an eye on. This includes the following:

What’s even funnier about this situation is that some of the gaming studios are responding to the leaks. For instance, the official Rage game twitter account retweeted the image above where several bethesda people and accounts replied.

This includes the main Bethesda account stating “Dude” followed by Pete Hines responding to comments. He even went as far as addressing gamer’s questions about the next Doom. He stated, “Go Buy a magic 8 ball at WalMart and ask it.” This is in reference to Walmart’s major hiccup.

Go buy a Magic 8-ball at WalMart and ask it.

One of the more exciting things to look forward to is Borderlands 3 which will be exciting to hear about at this year’s E3 conference. And what E3 would be perfect without another Assassin’s Creed announcement. We look forward to seeing more leaks in the coming weeks.