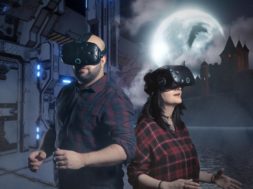 VR is commonly considered an escape from reality – but now developers are delving into a whole new genre where the goal is escaping the VR experience. Akin to the real world “escape rooms” that are sweeping the world, these group-based interactive experience are now being offered in VR.

On April 22, Tick Tock Unlock, a successful brick and mortar escape room company, will open its first “Hyper Reality Experience” escape room. While there are currently escape room VR games available on home systems, this experience will be unique because it offers the social/group aspect, one of the main components to real-life escape rooms, that home systems lack.

Based in the UK, Tick Tock Unlock has experienced such demand they have expanded to four different locations in Manchester, Glasgow, Liverpool, and Leeds. Owners Ali Kahn, former computer engineer, and his wife Samrien, Disney Veteran, have stated that they put their life savings (and earnings from their current locations) into bringing this experience to VR. The new Hyper Reality Experience will launch in Leeds, in the Trinity Leeds Shopping Center located at the heart of the city. The facility is developed by Tick Tock Unlock, and is similar to THE VOID’s Free Roam facilities, located in New York and Dubai.

To make immersive VR experience accessible, the Kahns are adding hosts or “game masters” whose job it is to guide the audience through the theatrical setting. The game master will help the audience into their HTC Vive Headsets, create context, and present the audience with their mission.

Currently, the headsets are still tethered to a computer with wires, but guests are free to walk about the room, interact with other players’ avatars (visible to each other in VR), pick up and manipulate objects.  Although the Hyper Reality Experience has yet to open, the Kahns have their eyes set the future; an untethered (wireless) Hyper Reality Experience Center opening at the end of 2017. This center will be able to accommodate six players at a time, and will feature two games, a World War 2 shooting experience, and a sword and sorcery fantasy.

If a ticket to London isn’t in the cards for you right now, there are currently 10 escape room titles available for various VR systems, and more coming soon!