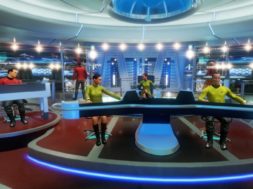 During a briefing held at GDC 2017, Chris Early, VP of Digital Publishing at Ubisoft has announced that the upcoming Star Trek Bridge Crew VR Title will have more than 40 hours of gameplay and experiences. This is quite interesting considering most VR experiences currently don’t offer that much content. Many VR games and experiences only last a few short hours due to budget constraints and development.

According to Early, content on Star Trek Bridge Crew will be divided into multiple game modes. One of such is called “Scripted Mission.” In this mode, you’ll follow a linear storyline with events occurring regularly through the journey. Essentially, it’s regular mode. A secondary mode called “Ongoing Voyages” will take you down a randomized path instead. You’ll be fulfilling missions in a random order, which can be voyaged by yourself or with your friends.

For those unfamiliar with the title, Star Trek Bridge Crew puts you and your friends in the control room of U.S.S. Aegis. You’ll be appointed as an officer to take part of a critical initiative on behalf of the federation. Your mission will be to explore a largely uncharted sector of space known as the Trench. This is in hopes of locating a suitable ne whome for the decimated populance of Vulcan. This uncharted territory contains many wonders and also a lot of danger. The Klingon Empire is active in the territory and won’t be afraid to take aggressive actions towards your fleet. Your mission in Star Trek: Bridge Crew will be to secure a peaceful Federation presence in The Trench territory.

In the above video you can catch the famous Youtuber, PewDiePie playing Star Trek: Bridge Crew with his friends in VR.

An amazing component to Star Trek: Bridge Crew is the fact that you command U.S.S. Aegis with your friends. It’s a multi-player strategy game that allows you to operate as a crew. Ubisoft also designed this game with VR in mind.

Star Trek: Bridge Crew was developed specifically for virtual reality and capitalizes on the powerful sense of social presence possible only through VR. Our hand tracking with full body avatars and real-time lip sync allow players to genuinely experience what it’s like to serve as an officer on the bridge of a Federation starship.

Ubisoft will be releasing the game on May 30, 2017 on the Oculus Rift, PlayStation VR, and HTC Vive VR headset consoles. We look forward to sharing the journey.