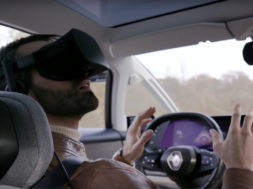 You’d think that using VR while driving would be a dangerous combination but Ubisoft and Renault don’t think so. Recently, the two companies announced a joint venture which will allow drivers to experience VR while the autonomous car drives itself.

Ubisoft describes this experience as being a part of a “partnership with Renault SYMBIOZ Demo Car project.” Ubisoft has developed a few VR experiences in the past such as Star Trek: Bridge Crew and Eagle Flight. This one however was designed to enhance the driving experience.

In the video you can see how the driver doesn’t have his hands on the steering wheel. He is allowing the Renault car to drive autonomously while he experiences a unique VR world.

Using the Oculus Rift, the drivers will be embarking on unique trips using the car’s data in real time. This means that the world will be created dependent on your surrounding and the roads in front of you. Whether you’re in rural landscapes or the urban environment, the virtual world will be created just for you.

The goal for the two companies is to allow the driver to escape, let go, and forget they’re in the driver’s seat. It will also highlight the car’s connection to its environment.

We don’t know how feasible this would be in today’s society where we don’t fully trust in technology to drive us around with 100% confidence. But in the future, this might actually be a good solution for drivers and autonomous vehicles looking for some enjoyable and immersive form of entertainment.

tags: autonomous car car vr driving vr Oculus Rift renault ubisoft
previous VRChat Might Be The Most Popular VR App For Good Reasons
next Check Out How These Artists Came Together To Create This 3D Star Wars Artwork In VR
Related Posts