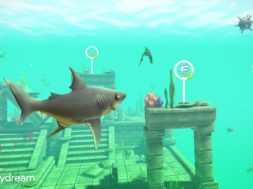 Shark’s usually get a bad rep in today’s society where they’re made out to be a villainous creature that’s always out to eat humans. We’ve seen this in movies such as Jaws and The Deep Blue Sea where they end up eating a lot of people (RIP Samuel L. Jackson). But in reality, the chances of you dying by a shark is 1 in 3,748,067. And this only counts for every time you’re by a body of Ocean where sharks are known to be around. On the other hand, humans are known to take 100 million sharks every year. So to flip the script, Ubisoft has released a VR game called Hungry Shark VR.

In Hungry Shark VR, you’ll be tasked with three main objectives, which are to eat as much as you can, race against time, and rescuing your fellow shark companions. In this game, humans are the evil ones where divers chase after you.

• Explore a massive underwater environment from caves to ruins and even shipwrecks!
• Whether it’s an eat, race or rescue mission, your swimming skills will be put to the ultimate test!
• Swim with the sharks, as a shark, for a full and exciting underwater adventure!
• Start with the friendly bull shark and unlock others including the iconic Great White!
• Various enemies await from stinging jellyfish to hostile divers!
• Unleashing your inner shark is easy with smooth and accurate controls!

As the game progresses you’ll have the option of choosing between different species of sharks such as the Bull Shark and the infamous Great White Shark. Hungry Shark VR is available today for $4.99 at the Google Store. This particular VR game is exclusive to the Daydream. Hungry Shark VR was produced by Future Games of London which is a branch of Ubisoft Studio in the UK. If you’re a fan of the friendly finned creature, make sure to give this mobile VR game a go.