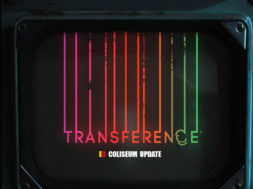 Back in June of 2017 we heard about a title in development called Transference. While things were sort of vague about the project, we got to hear a more in-depth story about the upcoming hybrid game at this year’s E3 conference.

Transference is a collaboration between Ubisoft and Spectravision which was co-founded by Lord of the Rings actor Elijah Wood. The game is an emotional, psychological, and intimidating journey between three family members; A Mom, Dad, and their son.

The panel explained that within the game all three of their consciousness gets uploaded into a program so they can be together again. This seemed like a good idea until there was an unexpected error in the programming which caused a dream to dissolve into a haunting nightmare. While watching the teaser they released, chills immediately ran down my spine.

The mechanics within the game are said to feel very familiar if you have played other narrative based games in VR. With live action games coming back into style they’re hoping that this game can excel past recent games and set some standards for game movie hybrids in the future.

As the player you switch between three point of views. Each individual POV will provide a very unique experience with empathy playing key throughout the story. Also all of items and elements that you will be coming across will have some sort of meaning and history behind it.

Even though it’s better to explore and find all of the things hidden within the game, one panel member said that the game is designed to allow players to work fast or slow at their own pace. Although, a quick playthrough of the game would definitely ensure a nice reply value.

It was mentioned a few times, during the panel, that throughout production of this game there have been many changes made. It was said that the elements have evolved along the way to fit the best cinema game feel for the user. Something interesting about the production of this game, explained by Elijah Wood, is that Daniel had not played many games before this project.

He then states “But now I think he plays more than me!”. If you did not know, Daniel Noah is actually head of development on this project. Overall the panel agreed that this will be a one of a kind game and that the experience will be suspenseful. The new experience is set to be released this fall on Playstation, Playstation VR, Xbox, PC, Vive, and the Rift.