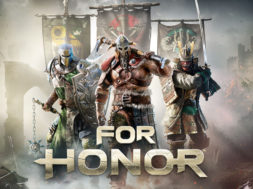 Ubisoft has come out with a big bang this year with the release of their new franchise game called For Honor. You’ll be able to choose from different factions such as “The Chosen” which are Samurai, “The Warborn” which are Vikings, and “The Legion” which are Knights.  Each faction has four classes to choose from.

For Honor is a single and multiplayer action fighting game where you’ll duel against other players online. There are four modes in multiplayer:

Dominion: In this mode you’ll be put in a 4v4 scenario where you must capture and hold zones in the battlefield (arena). You’ll be receiving points as you hold those specific zones from your opponents. When one team earns enough points the other team must eliminate the foe to win the game.

Brawl: This mode is a 2v2 scenario where you must simply eliminate the opposition in order to win. No strings attached.

Skirmish: This is a different 4v4 scenario where you earn points by eliminating your opponents. The more you kill, the more points you accumulate. When one team reaches enough points, the opponents must eliminate that team in order to win.

Elimination: In this particular 4v4 scenario, teams must eliminate one another. Last team standing wins the match.

To celebrate the launch of this new game, Ubisoft released a For Honor VR experience where you can see the different factions and warriors fight to their last breaths. This particular 360 video demonstrates the game’s awesome cinematic footage along with an immersive experience into the chaotic world. It does a great job demonstrating the outlines to this game.

The game was released worldwide on February 14 for Xbox One, PS4, and PC. There hasn’t been any word whether the game will be released in VR down the road. But hopefully, with time, the game will gain enough popularity to where it has a chance to make it into the virtual reality world. The For Honor VR experience trailer can be viewed on VR devices by downloading the Littlstar apps on iOS, Android, PlayStation VR, Daydream, Samsung Gear VR, and HTC Vive.