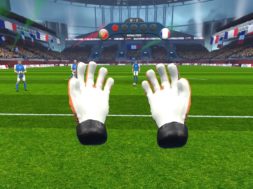 The 2018 World Cup in Russia is finally upon us. In this ultimate world tournament, we’ll be able to see the best football athletes come together to compete for their home nations. And to get you a little more hyped about the World Cup, DoDo4Story Games has released a new VR title called Turbo Soccer VR.

In this unique game, you will be playing as a soccer player in virtual reality. By using the Vive Trackers, every user will have both the hands and feet available to use. You can play as a keeper, midfielder, and even the striker for your team.

Goals are scored with feet, not thumbs – sensors attached to your shoes will allow you to shoot on goal

Be whoever you want to be – play as a midfielder known for assisting, the king of the penalty area or an agile goalie

In the trailer above is a professional soccer player named Kamil Grosicki who will be playing in this years World Cup for Poland. He currently plays for the Hully City club team as a Striker – Right Wing.

Turbo Soccer VR is available for you to play today so make sure to give it a shot for this year’s 2018 World Cup series.