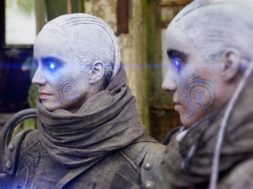 Announced at this year’s SXSW, UNLIMITED VR studio has revealed that they’re currently working on the world’s first interactive sci-fi VR TV show called Trinity. The premise will be set in the future when humans are no longer present on Earth. Rather, the world will be somewhat set in a dystopian future with androids ruling the world. There will be a pocket of robotic resistance where they take a stand against a powerful singularity set to destroy them.

Similar concepts have been created before (such as Halcyon) but not to the extent that UNLIMITED is deeming. The producer of the upcoming VR show, John Hamilton, stated that Trinity will engage viewers to interact with the characters like never seen before. It will put you in an immersive environment where you become a part of the world itself. The show will be divided up into five, fifteen minute episodes and will be readily available on most VR platforms.

UNLIMITED took a unique approach in filming Trinity where they developed their own proprietary 360 video rig to capture the virtual reality experience. They threaded their captured footage with high-end CGI to create a wonderful and interactive 360 VR experience for the viewers. Many in the filming industry have stated that current 360 cameras just don’t produce the quality necessary to publish on a professional level. Many studios opt-in to creating their own proprietary rigs to capture high quality footage.

Trinity will be among the select few, which will debut on multiple virtual reality platforms without an exclusive deal. UNLIMITED intends to share the experience to the whole VR community rather than a select group. The studio hasn’t announced the exact release date but a pilot to the VR TV show will be released to select partners this fall. The show looks promising from what we have seen through trailers and other exclusives.