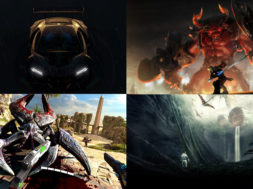 This week we’ve seen a lot of great releases in VR games and experiences. This includes one title from our AAA VR Games list, which is currently seeing many positive reviews from the community.

The list below is a mixture of games available on the HTC Vive, Oculus Rift, and PlayStation VR. We will have a description for the title and its availability to the platform.

Developed by Slightly Mad Studios, Project Cars 2 takes racing to a whole new level as they offer one of the most accurate simulations for cars and driving. The game features 180 different cars across 60 locations in 140+ dynamic living tracks. The game also reflects the 9 disciplines of motorsport and 29 motorsport series in-game.

Project Cars 2 is available on Steam for the HTC Vive and Oculus Rift starting at $59.99. If you pick up a copy of the game, make sure to try out the cars.

Serious Sam VR: The Last Hope is a FPS VR game that’s been in the works for quite some time. The story takes place during the first Menal War where Earth’s defense forces are crumbling under the hordes of the vicious Mental. The antagonist managed to break  the will of many nations by destroying the ancient shrines of the native people. So a fearless EDF captain by the name of Sam ‘Serious’ Stone emerged to defeat the evil forces by leading the resistance from the battlecruiser ‘BC Saratoga’ in a desperate attempt to save the galaxy.

There are various modes in the game that offers different styles of gameplay.

Serious Sam VR: The Last Hope is available on Steam and Oculus for $29.99 which is a 25% discount for a limited time. Make sure to check out the wild VR game as it brings a new type of thrill to the virtual world.

Fall in Love is a unique VR experience that puts you directly in front of actors and actresses where you’ll be asking and answering the famous 36 questions that will have you “falling in love.”

The questions range from surface-level, general information questions to more intimate questions and affirmations, which starts triggering deeper emotions. Moth + Flame stated that the conversations are timed perfectly to create a “seamless experience that allows subjects to feel as if they’re in the presence of the other person.”

If you want to test the 36 questions for yourself, you can download the experience today for free on the Oculus Store.

Robinson: The Journey is a story about a young boy who crash lands on a foreign planet called Tyson III which happens to be filled with prehistoric dinosaurs. Robinson is left stranded and must rely on his wits and his AI companion HIGS to survive the dangerous world.

The gameplay is about 3 to 4 hours in total and you’ll be solving various puzzles, climbing through rough terrain, and hide from danger in-order to save the crew.

The game was first released on PlayStation VR but is now available on the HTC Vive for $39.99. You can also download the game for the Oculus Rift.

The Solus Project is a single player exploration adventure game where you take on the role of a hero.

Humanity is on the brink of extinction where Earth has been destroyed and mankind lingers on in a small fleet of ships near Pluto. You’ll be tasked with finding a safe haven for a new colony where human civilization and can start over again. But due to unforeseen circumstances with your spaceship blowing up, you are stranded on a deserted alien planet called Gliese-6143-C. You quickly find out that you’re the last survivor of your crew and every other team member is dead.

The Solus Project has been available for over a year on the HTC Vive and Oculus Rift. Now it makes its official debut on PlayStation VR. You can purchase the game for $19.99 today at the PlayStation Store.

Eternity Warriors is a beloved game recognized by millions of fans worldwide. Debuting six years ago as a mobile game, the popular franchise is now making its way to VR. Developed by Vanimals Studio, this new VR experience will pit you against the strongest of foes in unsettling environments.

The game will allow you to choose from between 3 class heroes including Warrior, Hunter, and Gunner.

Currently, Eternity Warriors VR is available on Steam for $12.74 with a 15% discount for the Oculus Rift and HTC Vive.

If your trying to check out some new games, we highly recommend the above titles.