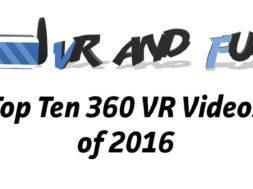 2016 has been an incredible year for technological innovations with the release of VR headsets and 360 cameras. Through the power of technology, we are now able to watch videos in a 360 format. With the spin of the camera you are able to see what’s left of you, right of you, behind you, below you, and even above you. Here’s the 2016 Top 10 list of 360 videos we thought were incredible to watch.

10. Isle of Jaws By Discover Channel

In this video produced by Discovery, we get a chance to go underwater with experienced divers to witness Great White sharks feeding on a dead carcass. The 360 video let’s us see their menacing power up close and personal. You’ll be able to watch the video in an omni-directional view and see the what lurks in the great ocean. The last scene in the video is quite exciting.

9. What Happens Inside Your Body? By Life Noggin

This video displays a simulation of what’s going on inside your body in 360 format. You’ll journey through the veins to make pit stops at vital organs such as the lungs. It’s quite an educational video that will allow you to turn and see what might be on the opposite side of the video.

Skydiving is an adventurous sport where you jump out of a perfectly fine airplane. Recently, a YouTuber by the name Sara Dietschy got a chance to go skydiving with a Samsung Gear VR camera in hand. It turns out to be quite an adventure where you feel immersed in the moment. If you haven’t yet had a chance to see this video, nows the time.

In this 360 video, you get to go on a surf sesh with a Big Wave Surfer Kyle Thiermann. The video is a mix of education and entertainment where the surfer gives you the basics to surfing then takes you out on a ride through the big waves.

Star Wars is one of the largest movie franchises to ever exist with more than 8 movies now that have officially debut through Lucas Films. In this fan made video, you get a glimpse into a fan’s idea of the Star Wars universe in 360. Cube CZ made an awesome fan based Star Wars short that does a terrific job in capturing the magic. This is what it’s all about.

5. Inside The Arctic Doomsday Seed Vault For The First Time By Seeker VR

In case of an Armegeddon like disaster, scientists have created a vault deep within the Earth to withstand devastation on the planet’s surface. Seeker VR got to document this underground fortress in 360 which gives an awry yet magical vibe to the facility.

4. The Harsh Reality Of Standing Rock By Seeker VR

Standing Rock has been a scene of controversy between the Native American tribes, oil companies, and the government. In this video, we get to witness the harsh conditions protestors are facing in order to stand up for their beliefs. It’s pretty amazing to see the organization and the magnitude of the situation.

In this video you get to go on a journey through the canals of Venice, Italy. The 360 video does a great job in creating that essence of being in the moment.

Currently, Clash of Clans is one of the biggest app games in the world with millions of users playing the game every day. This video hints at the capabilities of 360 videos where sleek animation, in combination of omni-angles, can lead to a fascinating world of story-telling. Even without the use of real words, you can feel the excitement in the short video.

In our eyes, this is the first true 360 VR video that has made an impact in the industry. Baobab’s team is made up of animators from studios such as Pixar, Dreamworks, and Lucasfilms. They did a fantastic job in creating a 360 VR video that’s full of amazing designs and animations. They incorporated the story in a way where 360 videos feel fluid with motion. If you had to watch one 360 video this year, this would be it.

All of these videos can be viewed in VR with the use of Google Cardboard and Daydream View VR headsets.

Enter The Black Hole By Anton

The black hole is one of the most interesting forms of mass in our universe for the way that it sucks up anything in range. This simulation will allow you to examine the gravitational pull from the black hole where you’ll quickly slip into, darkness. The creator did a relatively good job to display his work of art in 360 video format.