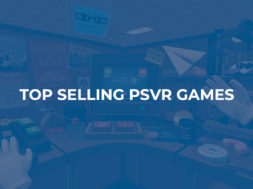 We recently saw how well some of the VR games did on the Steam Marketplace with Fallout 4 VR topping the list. Now, PlayStation has released a top sellers list for their PSVR games and it was quite surprising to see. Sony has sold more than a 2 million PSVR headsets since launch which means there were a lot of VR games to be sold on the PlayStation Store.

US PSVR Audience Base

Some of the consistent games that we see on both the best sellers list on Steam and PSVR are Job Simulator, Superhot VR, and Arizona Sunshine. On the Steam best seller’s list we saw Fallout 4 VR at the top with Job Simulator rounding out 4th place.

On the best seller’s list for PSVR we see Job Simulator at at 1st in the US and 3rd in Europe making the game one of the hottest overall VR games of 2017. Job Simulator has raked in around $3 million on Steam and that might be a similar number as well on PlayStation.

Another surprise is that Skyrim VR doesn’t seem to appear on the best sellers list over in Europe. Rather, its rounded out by titles such as Until Dawn: Rush of Blood and Sports bar. This was a timed-exclusive game launched on the PSVR and didn’t seem to make good sales in the European market. For Fallout 4 VR being a timed-exclusive for the HTC Vive, it did rather well on the Steam marketplace.

We look forward to seeing the top selling VR games on PSVR this year in 2018.