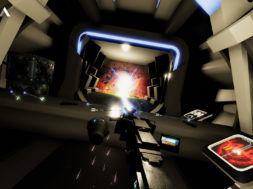 There’s been a couple big new announcements recently within the VR world. This includes the AAA VR game that’s currently in the works called Asgard’s Wrath being developed by Sanzaru Games. It will have over 30+ hours of gameplay which is quite exciting.

But there’s also some other games to be excited about that was just released this week. Let’s dig right in.

everybody’s sad is a a weird, therapeutic, kinetic VR experience about learning to balance self care and care for others. Use intuitive motion and pose-based controls to make sad, alive objects happy! But who will make you happy?

Settlement Zero is a first-person VR adventure using free movement, mixing open exploration with frantic combat as you defend yourself against autonomous spacecraft and robots.

Join Red, Chuck, Bomb and the Blues to save the stolen eggs in Angry Birds VR: Isle of Pigs, an immersive VR adventure! Discover the remote island where the greedy green pigs take their vacation in 50+ fun-filled levels – with more to come!

Defend your skyland! Grab a tower and fight off the pirates. Build traps to slow down their march. Construct utility buildings and expand your village. Play alone or join your friends in this in-depth strategy and tower defense game!

sCATter is a VR shooting rhythm game that shoots UDADA, a cat robot flying towards the player, according to music.

Experience virtual reality combined with the strategic elements of the tower defense genre and the thrilling action of a first person shooter. It opens up a new dimension of immersion for strategy and tactics. Thereby, AIRA VR is the first game of its kind that is exclusively developed for VR.