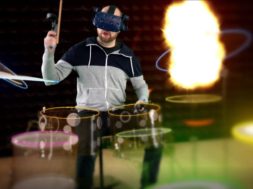 We are now into February of 2019 and it has been a glorious week thus far. There are many awesome new VR games that have just released. Let’s dive right in.

DrumBeatsVR is a VR drumming music game. Players can drum to our songs that are custom made for this game. In DrumBeatsVR you can practice on different drum kits, including Metallica and The Rolling Stones and you can play in three different environments (more to be added later).

Holopoint: Chronicle is intense archery combat. Explore the once lively island while skillfully weaving your way through waves of relentless holographic enemies, all while swiftly loosing arrows toward your targets.

Magic Realm: Online is a co-op multiplayer objective defense game developed exclusively for VR, featuring unique playable characters and beautiful maps. Play on your own or online with up to 4 people and defend the Source Crystal from power-hungry invaders of another world!

Biathlon Battle VR is a sports simulator game combining a ski race with rifle shooting. Rush on skis among snow-covered woods and mountains, participating in races and taking away gold medals.

tags: biathalon battle vr dog in a box drumbeats vr holopoint chronicle
previous Here's What You Need To Know About Virtual Army: Revolution
next You Are Here Puts Into Perspective Just How Small We Are Using VR
Related Posts