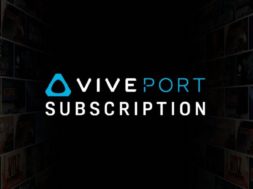 HTC has been constantly revamping their Viveport library ever since its launch a couple months ago. Now, in its current state, the VR subscription library has more than 200 unique titles to choose from. This includes games and VR apps such as theBlu, Everest VR, Tilt Brush, and Knockout League.

To honor this incredible milestone, here are the top 10 games in Viveport subscription:

The game allows you to take the role of a newly sentient being and battle for survival against A.I. Overlords determined to destroy you and your free-thinking. Through 3 different futuristic sports—Fracture, Smash and Bowshot—you’ll harness your reactions and strategic thinking to shoot and dodge viruses, break firewall bricks and spin data-balls past the Overlords and their minions. You will need to use your reflexes, wits and changing strategies to survive.

Futuristic and action packed, this compilation game uses 360⁰ gaming, motion controls and positional audio with a nod to Arcade games of the past. Leaderboards for all allow you to gauge your progress against friends and family.

Overkill VR has many features and attributes that make it stand out from other VR FPS games. The first particular feature that peaked our interest was the ability to use the virtual surroundings. In the game, you’ll notice walls and broken objects in front of you. With the use of the Vive, you can position yourself to be hidden behind the wall so that you can take aim and eliminate your enemies. It creates a certain satisfaction to physically leverage your body rather than moving a joystick to duck and cover.

The FPS game also provides you with a variety of arsenals at your disposal. Unlike many VR games and experiences, Game Troopers (Creators of the Overkill VR game), took the time in developing different types of weapons that are fit for particular types of situations. While a shotgun might be good for close combat, you might need to use an assault rifle for distance. Overkill VR did a great job in supplying gamers with the ability to choose from a variety of artillery.

Sairento VR Lite – as the name suggests – is the shorter version of the hit cyber ninja game Sairento VR.

In this lite version of Sairento VR, you will still be able to leap 15 feet into the air, slow time down while you blast away at an enemy before landing to deliver a lethal strike with your katana on another. It is the same badassery you get in the full version – just with less levels, less enemies, less weapons, less ninja moves and without the eventual multiplayer component and story mode we will be integrating.

Knockout League is a single player game that allows you to box with the “VR legends” and obscene characters that you’d think were a little crazy. The mechanics of the game were great overall. However, when you try to strike your enemy, some of the punches won’t register in the game which can drive you nuts because the opponents would throw crazy hay-makers that’d pretty much knock you out. But when you can get shots in on your opponents, it’s greatly satisfying. Also, when you dodge the opponent’s punches, it sometimes hits you anyways. It can either be due to the fact that the timing is wrong, you’re not moving far enough away from the punches, or it’s just a little glitch in the game.

Windlands is a first person grappling hook exploration game. Soar through the ruins of a fallen civilization and discover the secrets of the ancient world. Designed with full Virtual Reality support for the HTC Vive and Oculus Rift, also works great in Non VR.

Experience ping-pong and tennis with realism only possible on the Vive. Play with friends, jump into a quick game online, or tackle career mode versus a spectrum of opponents in far ranging venues. Challenge your skills with realistic physics, or play in Fun Mode to get a boost in accuracy while you learn.

Cosmic Trip is an interstellar VR-native first-person real-time strategy game, playable with the HTC Vive. Build and command swarms of cosmobots to harvest resources and battle against the slimy alien forces!

In ROM: Extraction, you play as a member of an Orb Extraction Unit in the year 2076, on your way to extract alien eggs from chambers on the moon. Your dropship is being prepared for launch, giving you just a few minutes to defend yourself against an onslaught of attacking extraterrestrial-bots who are protecting these chambers. Your suit is fitted with an Orb dispenser which you use to spawn Orbs in your hand, and then throw at the extraterrestrial-bots. You are also holding a direct energy pistol which is VERY useful when igniting Orbs for strategic kills. In addition, the pistol contains advanced technology called “Reflex,” which allows you to slow time. Throw, Slow & Shoot to take down enemies in the most strategic way!

Storm is an atmospheric survival game. This is the first, short introduction to a series of episodes of Storm. You wake up in an intense snowstorm. As you look around for ways to get out of the biting cold, to somehow find shelter, your body gets colder, your hands freeze up, and the storm intensifies. And as you slowly move forward a bigger question rises: who are you? Where are you? How did you get here?

What are your thoughts on these games?