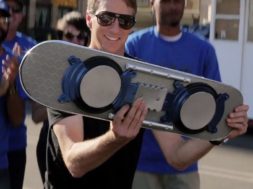 As we know, many celebrities and athletes have become infatuated with VR technology. From actors such as Joseph Gordon Levitt to producers like Jon Favreau, they have all committed to partake in developing content with the use of virtual reality technology. The most recent to join the VR community is Tony Hawk. This famous skateboarding legend has explained his infatuation with VR in a recent interview with Yahoo Finance.

“It feels like your stomach’s falling out of your chest when you’re free-falling and things like that. That to me is really exciting, because I don’t feel like we’ve had that in any other video game realm.” – Tony Hawk

According to the interview, he owns an Oculus Rift CV1. He has tested out games and simulations with the use of the headset and found it to be pretty amazing. Tony Hawk also found some infatuation to the technology through his 15 year old son Keegan. “My 15-year-old son Keegan loves it,” Hawk said. “He’s always telling me about all the updates, and really I guess he’s my target audience in terms of how to get the information. He’s my focus group.”

Tony Hawk understands that there’s a lot to be improved upon with the technology but hopes to create an immersive experience in the future with the use of VR.