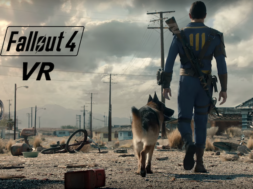 Even with GDC 2017 wrapped up, there seems to be a lot of news pumping out around the gaming industry. We’ve been introduced to numerous games and updates within the VR industry. One that we didn’t quite mention was the state of Bethesda with Fallout 4 VR. We know that the team is diligently working on re-adapting the game to the VR platform but haven’t heard much about the release since the beginning of the year. But in a recent interview with HipHopGamer at PAX EAST 2017, Pete Hines, VP of Marketing at Bethesda unloaded some exciting answers about the state of Fallout 4 VR.

“Fallout4 VR is the most incredible thing you’ve ever seen in your life,” is what Todd Howard told Hines. “You can’t even imagine what it’s like playing in VR and how realistic it looks. And everywhere you turn your head, it’s going to blow your mind.”

This is big news to hear as the VR game is building with high anticipation. The console version of the game did amazing in the market selling over 12 million copies world wide. It also gained high rewards such as the BAFTA Games Award for Best Game and excellent reviews by famous gamers. And something even more exciting to learn was that Fallout 4 VR will make an appearance this summer. “We’ll have it at E3,” said Hines. This means that that we’ll be able to take a glimpse at a working version of the game.

For those of you waiting patiently for the release of Fallout 4 VR, you might not have to wait too much longer. The only thing of concern right now would be the discrepancy in release as there is an ongoing battle between Bethesda’s parent company and Oculus. This may result in Fallout 4 VR being unavailable for the Oculus Rift owners (which we hope is not the case).