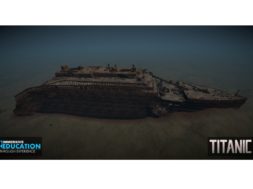 Immersive VR Education Ltd., creators of the Apollo 11 VR experience has announced a new upcoming title called Titanic VR, which will take you into the great depths of the ocean to explore the iconic ship.

Diving to the bottom of the North Atlantic, users will take on the role of Dr. Ethan Lynch, Associate Professor of Maritime Archaeology at the fictional University of Nova Scotia. With funding from a mysterious investor, Dr. Lynch and his PhD Candidate Jean Robinson have set out aboard a research vessel to dive the wreck and answer questions that have remained submerged for a century.

In the trailer above you can see that players will be stationed within a specialized submarine capable of reaching the deadly depths of the sea. When you reach the sunken vessel, you’ll be able to control the submarine and explore the exterior and interior of the ship.

“We’ve used comprehensive maps to create a realistic 3D model of the wreck site,” said David Whelan, CEO Immersive VR Education Ltd.  “We used motion capture, face-scanning technology and professional voice actors to immerse users in the story. We wanted to create an accurate portrayal of events so that it is not only educational, but also emotionally engaging.”

This educational experience and game is set in the near future, but explores a more-intact 1985 model of the wreck. Players will have the option of following the storyline or purely explore the shipwreck in a sandbox mode. Titanic VR is a hands-on experience, with players required to navigate around and inside the wreck. Immersive VR Education has stated that this experience is designed for room space, but is also suitable for sitting space, and monitor mode.

Titanic VR comes with a voice assistant to help you navigate and learn more about the wrecked ship. It’ll also feature bonus missions such as rescuing a lost ROV, creating a photo mosaic, placing research equipment, and working with a world-famous Director. You’ll also be able to clean and preserve recovered artifacts in the game.

Titantic VR will be released on Oculus Rift, HTC Vive, PlayStation VR, and desktop PC in the coming weeks. There will be an updated version to the game down the road where players will witness key events through the eyes of a survivor during 1912. It will be a historically accurate recreation of events, based on eye-witness testimony and substantial research. This will help users understand the historic and tragic event on a deeper level.