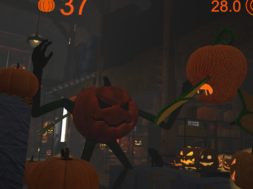 Pumpkins and Halloween go hand-in-hand like peanut butter to jelly. If there’s no pumpkin, there’s no Halloween. So to celebrate our love of pumpkins we’d like to introduce you to a special game called Pumpkin Smasher VR.

In the game, your main mission is to smash as many evil pumpkins as possible. You’ll find that in this virtual reality game, there are no regular pumpkins. They come in all shapes and sizes with some pumpkins even being able to walk.

You are visiting the pumpkin farm just after Halloween. They store the pumpkins in the barn. Something has gone wrong this year, and the Ghouls have taken over the farm.

You must smash as many pumpkins as possible in the time limit. You smash pumpkins by picking them up and throwing them, or hitting them with a baseball bat or sledge hammer. You can teleport around the barn to get to more pumpkins. Also smash the Flying Pumpkins and Pumpkin Monsters. Find and smash the Pumpkin Boss.