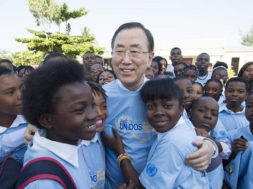 Time has just released a 360 VR Video Experience called “Home” which documents the last bit of Ban Ki-Moon’s tenure as UN Secretary-General. Through their Life VR app (on iOS and Android) you can watch the journey of Mr. Ban as he travels to more than ten countries in five months to draw global attention to the needs of 130+ million people impacted by natural disasters and conflicts of war.

In the “Home” episode you’ll be drawn to places such as Congo and Jordan where they meet young refugees who are going through a rough time. Particularly, you’ll see the interaction between a Syrian Refugee and the UN Secretary-General where Mr. Ban shares some of his stories from the past of having to flee his burning village. Ban Ki-Moon also believes that with VR technology, events can be documented better.

“Virtual reality is a fascinating immersive technology. It has the power to make people perceive and feel one another’s reality and, in so doing, can help create empathy and compassion in a world that needs it more than ever.”

This particular 360 VR experience was produced by the United Nations Office for the Coordination of Humanitarian Affairs with the support of UNICEF to raise awareness of the devastation going on around the world. And as a lever to drawing attention, the Black Eyed Peas joined in on the project and featured their hit single “Where Is The Love.”

The 360 VR video above is only a trailer. The full length experience can be found on the Life VR app.