Tim Cook, CEO of Apple, is on a massive media tour these days talking about their newest iPhone. During his interview with Good Morning America on ABC, he briefly goes over the topics of virtual and augmented reality. Tim Cook told Robin Roberts of ABC News that he believed AR is going to have a bigger future and footprint than virtual reality.

He mentions that, “Both of these are incredibly interesting” but prefers augmented reality because of its commercial viability and allows users to be present in the real world, where as virtual reality fully immerses its user into the virtual world. Apple’s CEO put it boldly that, “Augmented reality is the larger of the two, probably by far.”

Apple didn’t release any updates or news about their VR/AR research at the Apple Event that was just held a few days ago, but they have been leaving little trail crumbs that proves that they are in research. In May of last year, Apple acquired an augmented reality company called Metaio. This company has been researching augmented reality technology since 2003 with more than 100,000 clients. They also hired a VR/AR expert, Doug Bowman, who’s a computer science professor at Virginia Tech. He helped work on titles such as Minority Report in creating the 3D projected displays. 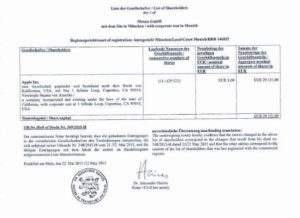 Tim Cook seems to heavily favor augmented reality technology and that may be with a good reason. With the acquisition of one of the most experienced companies in AR and the hiring of a leading AR expert, Apple might be gearing up for the launch of their AR solution. They’re currently the only ones missing in this growing VR/AR scene that hasn’t released a line of product out of the big 3 (Apple, Samsung, and Microsoft). But it might soon be time to unveil their Apple stamped headset. Stay tuned.