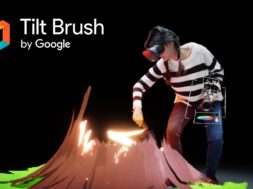 Tilt Brush was one of the first and most amazing experiences that I got to enjoy in virtual reality. The way that you can paint in 3D and among the stars in space just made the experience magical. Now Google plans on bringing Tilt Brush to the Oculus Quest.

The reason why this is so fascinating is because Tilt Brush was only available to tethered devices. Now the plan is to bring it to a free standalone device, the Oculus Quest.

“Tilt Brush is designed for creators — whether you’re a casual doodler or a professional artist,” says Google Product Manager Elisabeth Morant. “Over time, we’ve seen the product used in ways we never would have imagined — from bringing our favorite Disney characters to life, to prototyping what became a Time Magazine’s best of 2018 invention, to 3D printing and casting a Tilt Brush self portrait as a bronze statue. The possibilities are endless, and we’ve only just scratched the surface.”

Morant also goes on to describe how the team was able to bring Tilt Brush over to the Oculus Quest which is a mobile chipset compared to tethered devices that are powered through PC GPUs.

“Most of our work porting Tilt Brush to Quest focused on performance improvements. Luckily, some decisions we made early on set us up for early performance wins. For example, instead of recreating stroke meshes on the GPU for every frame, Tilt Brush strokes are converted from their internal control point representation into geometry only once: either when the user first creates the stroke, or when the sketch is loaded from disk. The GPU then just has to render a list of pre-generated triangles. Another early easy win for us was to switch over our stroke rendering from double-sided to single-sided, using the shader to draw the reverse side of the stroke, and instantly halving our triangle count.

We also had to make a few visual changes as well. For example, the PC version of Tilt Brush uses a full-screen pass to render selected objects, perform a blur on them followed by a threshold to create an outline effect. Doing a full-screen effect that would involve a read-back was not feasible on mobile. We tried various options to do outlining on strokes, and in the end we chose to go for a solution that looked completely different.”

Google Tilt Brush will be released some time this Spring alongside the Oculus Quest.

tags: google oculus quest tilt brush VR Art
previous N1NE: The Splintered Mind Part 1 Brings Cyberpunk Detective Game To VR
next How These 2 YouTubers Got Stuck In The Middle Of The Ocean In VR
Related Posts