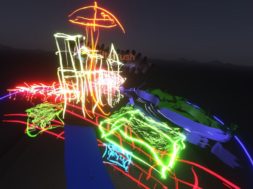 Tilt Brush, by Google, one of the most popular selling apps, added a major update today. Tilt Brush lets you paint in 3D space with virtual reality. Your room is your canvas. Your palette is your imagination. The possibilities are endless. The update features the addition of a social online gallery in which public sketches can be viewed here  — sketches you ‘like’ on the web will show up in your sketchbook in the Tilt Brush app.

While the feature updates allow you to have way more control over your artistry, the coolest aspect is the social aspect. On the new social site, users can upload sketches straight from Tilt Brush without having to mess with rendering settings. Once a piece is titled and published, anyone can use any device to tumble around it in 3D, “like” it, and then “remix” it in Tilt Brush. When you like a piece on the site, it’s added to a “liked” folder within your own Tilt Brush Google account. From that folder you can open the piece in VR, change it, or add to it. Afterwards you can re-upload it to the site so the original artist can view your changes. Explore the different categories: animals and creatures, art, nature, people and characters, places and scene.

Tilt Brush is available for Oculus Rift and HTC Vive for $19.99.