This Should Get You Excited For ‘The Walking Dead: Saints & Sinners’ VR Game 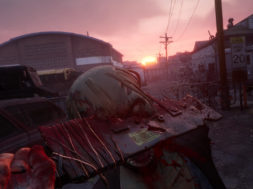 This Should Get You Excited For ‘The Walking Dead: Saints & Sinners’ VR Game

We recently got a glimpse into the upcoming Walking Dead VR game by Skydance Interactive in association with Skybound Entertainment but there’s some new footage by Node that has caught our attention.

We know that the dev team has been spending quality time in developing this game out to be quality but in this new video by Node you can see just how much detail has gone into making Walking Dead: Saints & Sinners.

Here are some of the big features we can see in the game. To start, you’ll see how it takes precise stabbing to the head to take down a zombie. You’ll be able to melee kill these flesh eating monsters with your knife with a broad stroke to the head.

If for some reason you get damaged by the zombies or other humans you can eat food or bandage yourself up to heal yourself. But it doesn’t happen with just a simple press of the button. You will have to follow through the actual motions to apply the healing which was a nice touch.

There’s also some pretty neat details when it comes to items such as smoking a cigarette which is unnecessary but fun to see. They literally describe the item as “smoke’em if you got ’em I guess…”

NPCs help kill zombies if they are close by. But one of the unique factors to these characters are how you can make choices of killing or working with certain factions.

They provide you with details in what has happened and you make an informed decision based on their statements/actions. That’s a nice touch as it makes it feel more realistic than just simply following one story line.

There will be a versatility in weapons that range from simple knives, swords, pistols, shotguns, and assault rifles. But the way they aim and function is a step up from a lot of VR games.

The Walking Dead: Saints & Sinners is set to launch January 23, 2020. So it’s not that far away. Make sure to put this AAA VR game on the list for next year.