Home VR Games This Might Be The Next Tribes Game For VR
VR Games
February 2, 2017 SJ Kim 0

This Might Be The Next Tribes Game For VR 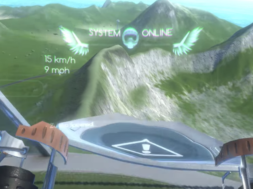 This Might Be The Next Tribes Game For VR

A lot of gaming studios in the VR industry have been working diligently on releasing quality experiences with awesome graphics and immense storytelling. And a lot of these titles are to be released later down the road. While that’s terrific news, there isn’t a single VR title holding the community’s attention. But recently, we found out about an independent gaming studio called Zulubo that’s been working on a promising simple VR game.

The name of the VR game is JetSkiers. At the beginning of the game you’ll be spawned in a training facility where you’re given a choice to choose between two weapons. After you choose your weapon, you get to choose a map you’d like to enter in to. With jetpacks strapped on to your back, the VR character will be given reigns to fly across the virtual world.

The goal of the game is to take down monsters that spawn and try to reach the highest score possible. One thing to remember about this particular VR game is that it’s still under development. The video above is just a dev progress.

Currently, the gaming market is in flux with AAA titles facing off against smaller gaming studios. An example of this scenario would be Rocket League. This particular title was a free to play game on PlayStation Networks during its initial launch. But it quickly caught steam and developed a large community where tens of thousands of gamers play it daily. The game is quite simple where you take control of a vehicle in a futuristic soccer arena. The goal is to score on your opponents with a gigantic soccer ball. The game has made millions of dollars so far. The development costs of the game were tiny compared to games such as Grand Theft Auto or other relative AAA game.

There is power in small gaming studios and games that many don’t realize. JetSkiers by Zulubo is the perfect example of this. While the game isn’t fully released, it takes the essence of a similar game called Tribes which received high reviews (9/10 on Steam). We look forward to future updates for JetSkiers.