This Is What Robo Recall Looks Like On The Oculus Quest 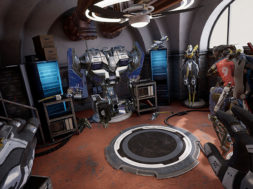 This Is What Robo Recall Looks Like On The Oculus Quest

Robo Recall was hailed as one of the true AAA VR games to ever release on the VR platform being exclusively released on the Rift VR headset. Originally created by Epic Games, Robo Recall allowed you to rampage through the city destroying all enemy robots that stand in your way.

Now Robo Recall is getting a port over to the Oculus Quest stanadalone VR headset where players can again enjoy the magnificence of the immersive game. But this time, the game is being led by Drifter Entertainment, creators of Gunheart and Ready Player One: Rise of the Gunters.

One of the big challenges to overcome in porting this title to the Quest was the strain it would put on the GPU. Robo Recall is a graphic intensive game that requires high GPU power. But with the Quest using a small Qualcomm Snapdragon chip, the game needs to be adjusted to work within the benchmarks.

“It’s going to push the platform extremely hard,” says Davis, to the Oculus team. “a fantastic opportunity for us to understand how the hardware performs—what are the challenges and trade-offs?”

Davis also states, “Our core principal was, ‘Do not change the gameplay,’” stresses Davis. “We want complete parity on Rift and Quest.”

To his this goal the team focused on rendering and technologies like Multi-View, working hard to squeeze as much out of the GPU on Quest as possible. “We had to find ways to bring back the feel of those things while still hitting our performance targets,” Davis notes. “Robo Recall is Epic’s IP, and they care deeply about it,” Davis says. “They trust us, but we have to prove to them that their trust is well-founded. The months leading up to GDC involved a lot of last-minute flights to demo the game at Epic and show them that it’s going to be fantastic. We’re really excited to let press get hands-on this week.”

Robo Recall is set to debut alongside the Oculus Quest on launch day.