Home AR News This Is Portal In Augmented Reality With The Use Of The Hololens
AR News
AR Videos
February 6, 2017 SJ Kim 0 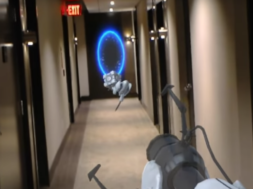 Portal is one of the most popular game released in recent history with millions of copies sold worldwide. The game was launched on PC, Xbox, and PlayStation in 2007 (about a decade old). Developed by Valve, Portal has you solving puzzles by using “inter-spatial portals” (warp gates) to transfer yourself and objects into other areas throughout the map. You’re armed with the “Aperture Science Handheld Portal Device” that creates these spatial gates.

Recently, Kenny W created a very entertaining Portal project on the Microsoft Hololens which allows you to use the digital portal gun in the physical world through augmented reality technology. The video shows how you can teleport objects from one location to another through the portals created by the user.

The video above is a fan made project and not developed by Valve. It’s currently a sample and not a full-length game. However, this is something to be really excited about. What Kenny has demonstrated is that you can apply ideas from games into augmented reality technology that interacts with real life environments.

During this segment of the video you can see how the boxed object tumbles down a flight of stairs as if it was interacting with the physical environment. the object rolls when it hits the edges and teleports through the portal when it reaches the bottom. There really hasn’t been this big of a buzz for an application since Pokemon Go. We look forward to more developments on the Hololens like the one Kenny has created with Portal.