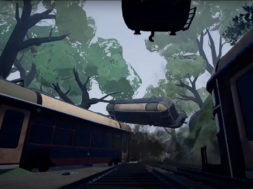 From Flight School Studio comes an ominous and eerie VR game called Manifest 99 where you’ll be finding redemption in the afterlife.

The story takes place aboard a mysterious Harry Potter like train that rumbles through an unknown void. Here, you’ll be assisting four distinct travelers named Bear, Doe, Owl, and Crow as they make their journey to their final destination. Using character engagement as a method of movement, Manifest 99 allows you to explore scale and navigation.

While the story and description of Manifest 99 might sound calm, it appears to be opposite in the trailer where you see a lot of berserk action happening. It seems as though the train starts falling apart due to unforeseen nature or maybe even a sabotage.

You can actually even see the train come off the tracks and create chaos. According to Flight School Studio Manifest 99 will feature a distinct experience that’s uncommon in today’s VR games.

– A rich world rendered in a striking, painterly visual style

– Move around by gazing into the eyes of characters

– Discover each character’s lost objects to complete their passage

Flight School Studio has yet to announce when the Manifest 99 will be available but the game appears to be coming to PlayStation VR. No word yet on its availability on the HTC Vive or Oculus Rift.