TheWaveVR Is Putting On Their Third Flagship Show With HEAVYGRINDER 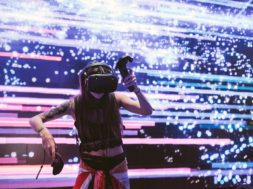 TheWaveVR Is Putting On Their Third Flagship Show With HEAVYGRINDER

TheWaveVR has been putting on some stellar VR concerts over the past few months, most recently being with GRIMECRAFT in their new virtual club. Users had access to a bunch of new items such as bubbly champagne that made the experience a lot more exciting and enjoyable. Today, TheWaveVR has announced their third flagship show which will be featuring HEAVYGRINDER who will surely be bathing the audience in neon lights.

Inspired by the infinite neon sprawl of eastern cities like Tokyo, as well as the playful energy of kawaii culture, this wave puts you high above the city to party with celebrity DJs themselves. HEAVYGRINDER is a duo based out of Los Angeles, CA, producing Metal-Electronica & EDM. Users at the show will have access to a brand new NEON SWIRL toy, available for free for one night only.

“We’re really excited about this show as we’re huge fans of Heavygrinder. We’re also excited to show off how powerful some of our internal tools are for customizing these shows to artist’s aesthetics,” said CEO and Co-Founder Adam Arrigo. “We’ve built some really cool ways to bring artists’ content into this crazy realm of VR.”

The show is set to air at 7pm pacific time on Wednesday, July 26th through TheWaveVR app available on SteamVR for Vive and Rift users.

In the coming weeks, the Austin and LA-based company will be releasing content that is incredibly varied and specific to the artist. “We want each show to feel like a portal into that artist’s world – to have unique visuals and interactions that couldn’t be possible outside VR,” said Arrigo.