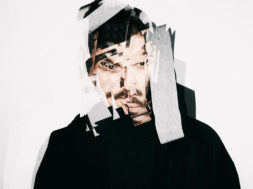 The virtual reality concert will bring the Iranian-born, London-based artist’s audio visual show to the US audience via the virtual platform. Ash Koosha is one of many artists who are currently restricted entering the US due to visa complications from President Donald Trump’s travel ban earlier this year.

“There are no borders inside VR,” said TheWaveVR CCO and Co-Founder Aaron Lemke. “We’ve been working hard to develop a community that’s both positive and inclusive, where all are welcome. Soon artists will be able to use our platform to reach all their fans at once, and these physical, man-made boundaries won’t have so much power.”

The show, titled AKTUAL, debuts on TheWaveVR concert platform where fans with an HTC Vive or Oculus Rift can be transported to the show to interact as avatars in a shared virtual space in real-time. Ash Koosha will be performing the show from London, using an HTC Vive virtual reality headset to manipulate both the music and visuals live in TheWaveVR’s virtual venue.

Ash Koosha, who had been imprisoned and blacklisted by his home country for making rock music and films, lives in asylum in London, where he produces what Rolling Stone calls, “uncompromising, dizzying and dense” electronic music. Rolling Stone  named him “An Artist You Need To Know,” last February, upon the release of I AKA I on Ninja Tune.

Earlier this year, Ash Koosha had to cancel his tour in the U.S. due to Trump’s travel ban, and has yet to set foot in the US where he seeks to promote his music. Earlier this January, he issued a statement on the travel ban writing, “All of my ambitions, contributions and efforts were reduced to bureaucratic paperwork that left me feeling betrayed and burdened because of my ‘place of birth’.”

“Ash’s music and artistic vision has been an inspiration to us since we started the company,” said TheWaveVR CEO and Co-Founder Adam Arrigo. “When we met Ash last year, we bonded over the idea that VR could give fans unprecedented access to deeper dimensions of artists’ visions. This show is the culmination of a long distance collaboration that we think speaks to VR’s potential to unite people around art.”

AKTUAL is the fourth flagship show to debut on TheWaveVR platform in a series aimed at redefining what live concerts can be in virtual reality. The show was produced by TheWaveVR in collaboration with visual artist Hirad Sab, Art Direction by Strangeloop. The show will be streaming on TheWaveVR’s Facebook page and Twitch page live. Make sure to tune in on Wednesday, August 16 at 7pm PST for an unbelievable experience!