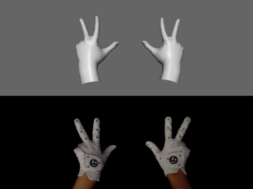 Michael Abrash, Chief Scientist at Oculus, recently posted a blog that depicts his ideas of VR technology moving into the future. In his literature, he revealed some amazing technology improvements being developed by his team including a pair of advanced hand tracking gloves.

Abrash states that representing real humans in virtual space will be the single biggest reason for the widespread adoption of VR. Companies will have to create “compelling virtual humans which require the integration of at least four separate tracking technologies,” one of which includes advanced hand tracking.

“Unfortunately, hands have about 25 degrees of freedom and lots of self-occlusion,” said Abrash. “Right now, retroreflector-covered gloves and lots of cameras are needed to get to this level of tracking quality.”

This new development was first introduced to us by Mark Zuckerberg when he visited the Oculus Research Lab in Seattle. He was able to provide us with pictures where you can see him trying out the hand tracking gloves for the immersive environment while using the Rift headset.

The advanced hand tracking gloves are definitely just a prototype and something that Oculus hasn’t really announced. The company will not be releasing any new hardware in 2017. But the demo exemplifies where Oculus is focusing their attention and how they want to set the tone moving forward.

We’re seeing similar objectives from other companies such as Valve who’s already sent out their Knuckles hand-tracking controllers to developers and studios. What are your thoughts on Abrash and his belief on the need for “compelling virtual humans?”